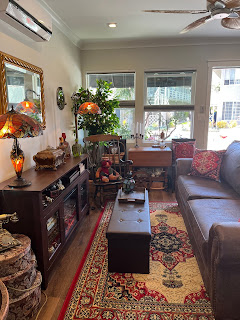 This was the day my sleeper/sofa (ordered late February) arrived. A week prior, I'd been told it had been delivered to the local furniture store ... only they had no record of it. Mind you, these folks are on the ball and not the least bit flakey.

Since I'd been paying rent for 3 months for a place I did not yet live in (tried a foldout sleeper chair and it was a bust), I was not keen to go another 12 weeks. But miracle of miracles, the fine furniture folks pulled strings, called in favors, and had a new sofa made. That's the one I received.

It's got brass studs and was selected to sync with my living area theme of "a retired pirate captain from the Golden Age who went through a wormhole, ended up in modern day Naples LBC, and decided to downsize." ... Yep

Email ThisBlogThis!Share to TwitterShare to FacebookShare to Pinterest
Labels: 343◻︎'