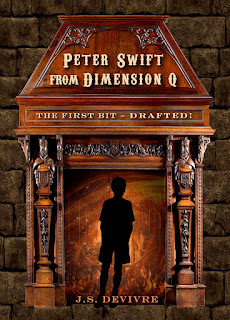 I had a ball cranking out Pete Swift's 100K-word story in a month, then spent a month self-editing, and followed it up with a party shortly thereafter to celebrate the achievement of cranking out the story in a month. I really didn't plan to become an author (and still don't view myself as one), and merely wanted to celebrate what I viewed as an accomplishment -- something akin to when one runs their first 10K. The 2016 story was nearly as bad as the original one written back in 2001, the addition of elements notwithstanding.
I went back to my "regular life" and thought nothing more about the Omni stuff ... at first. A few kind and supportive people suggested the world of the academy was worth exploring further. I scoffed, fully aware how poorly written Pete's story was. Yet, I also agreed with those kind folks. I gave it a good think, and decided Pete's story deserved better.

I pulled Peter Swift from Dimension Q off the internet sales shelves -- at least as best as possible. It's hard to remove all traces from the web. I then set to doing the story right. Unfortunately, the third time was not the charm, as subsequent posts will reveal.
at August 02, 2016