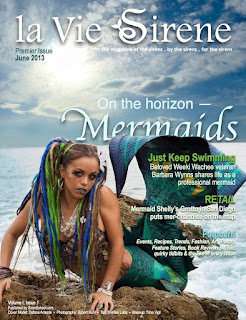 July 2012 - While I wrangled with 'not feeling so hot' and attributing it to changes in my personal life, Siren School floundered. I just wasn't able to actually do any of the activities I had planned, such as Mermaid Camp, Genie Getaways, a Pirates Caribbean Cruise, and more. The idea came to me to create a magazine 'of the sirens, by the sirens, for the sirens' as a means of encouraging folks to spread their creative wings.

I had a lot going on at the time, including going to another part of the state to help a friend for a couple of months, then moving across country. Plus, I'd been doing mystery events at tearooms to help them get business, and with my leaving, wanted to figure out a way to keep that activity going in my absence. I created Cup of Mystery games to fill that void. (I've since pulled the site since I have other projects to work on.)

On 1 June 2013 the first issue of la Vie Sirene was published. The theme was Mermaids. We published 15 issues before submissions became too scant to continue, which was just as well since my health had become bleckh. It was a wonderful feeling having the opportunity to publish the work of artists and folks who never thought they could (or should) write. It was the first spark that would later lead to the creation of the arts nonprofit Whimsicalidocious.
at June 01, 2013