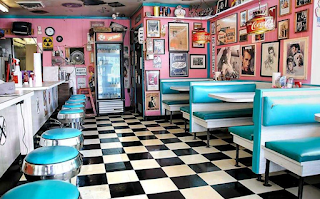 “Are we here?” he mumbled, trying to figure out when he dozed off.

“If by here you mean Uncle Dabney’s Famous Pigs in a Blanket Family-Style Restaurant, yes. If you mean the new base, you’re about seventy-three hours short,” his father said.

For the Drakes, the meal was business as usual. For the diner staff, it was a living nightmare. The lieutenant insisted on switching tables more than once, complaining how smudged the tabletops were and griping about the condition of the booth upholstery. He demanded all of the hermetically sealed utensils be replaced with clean ones, and he sent back his wife’s order because it wasn’t exactly the way he would’ve liked it.

Pete tuned out the commotion by his usual means, retreating into his head to design a doodad, the term he used to describe his favorite inventions—machines that involved complicated actions conducted by various mechanical parts all intended to perform a simple task. His original term for his proposed line of wunder-widgets was doohickeys, but he changed it to Doodads as a pun in honor of his own dad, hoping to make him proud. (The fact Billy made fun of the word hickey may have weighed into the decision as well.)

At six years of age, Pete had entered a science fair with The Scrammer, a contrivance he put together to scramble eggs at the flip of a switch. He’d meant the name to be The Scrambler, but couldn’t fully enunciate the word, and his mother found his childlike pronunciation endearing, so the Scrammer moniker stuck. Employing a turntable, reflex hammer, flare, pie tin, and paint-can shaker, his creation was a cinch to win the fair’s coveted Gold Volcano trophy along with a two-year subscription to Safety First—a moralistic science-themed comic book series for kids.

His father had insisted on tying The Scrammer to the car’s roof rack, disregarding Pete’s and Cassie’s pleas to stow it in the back of the station wagon.

The contraption made the trip intact. But in removing it from the car, the lieutenant was foiled by one of his own masterfully executed no-slip knots, and he inadvertently broke a large piece off the Scrammer.

“Just tape it back on. You brought duck tape, didn’t you?” his father said.

The little lad’s tears flew in a semi-circle as he shook his head.

“For cryin’ out loud, what sort of cockamamie builder doesn’t carry duck tape with him?”

When showtime came, Pete’s pride and joy was disqualified for failure to operate. No trophy for Team Drake.

That was the last such competition the lieutenant allowed Pete to enter, for reasons the young inventor had yet to discover.

His current doodad was designed to make his existence as a teenage vassal substantially easier. He dubbed it the Auto-Scrub, a sort of do-it-yourself mechanized device for washing the exterior of an automobile—a Lilliputian-sized automobile, mind you.

“Didn’t mean to startle you, but we have to go. Your brother and dad are already out the door. You can resume your inventing when we get to the car.”

Pete grabbed the shoulder strap of his backpack and grudgingly scooted out of the booth, convinced the family would never make it through the remainder of the trip without some sort of catastrophic blow-up or calamity. Taking halting steps, he moved toward the door, fiddling with the controls on his music player, his mother prodding him forward.

“Wazzak!” cried a bubbly teenage girl sporting vintage sunglasses and a swinging ponytail, jumping to the side to avoid a head-on collision with Pete as they passed each another in the doorway.

“Oh, sorry,” Pete said, still toying with his music player as his feet continued in the general direction of the car where Billy sat leaning on the horn.

“Just some barmpot I almost knocked into,” the girl said, seemingly to no one. “No worries, no one suspects anything. These clueless Q-zers won’t know what hit ’em, or should I say who hit ’em.”

“No, were you listening to that girl?” he whispered, hunching to be less visible, his eyes darting in search of whoever she was talking to.

“What girl?” Cassie asked, nudging Pete along. “Walk and talk at the same time, P.J. And if you’re referring to the young lady at the entrance, the answer is no. I was not eavesdropping on her conversation, and you shouldn’t have been either!”

“I didn’t mean to, but that’s not the point. She sounded like she was plotting something—”

Another blare of the car horn put Pete’s conspiracy theories to rest.

“On the double!” the lieutenant called, standing beside the open car door and giving a few quick taps to his watch buttons. “You’ve put us six minutes behind schedule, Junior.”

“Sorry, sir,” Pete called back, jogging as he pictured both his father and brother in circus clown regalia, crammed into a VW Bug with dozens of their clown-car crewmates.

After returning to his designated seat, Pete stowed his backpack out of his brother’s reach, then buckled his seatbelt with one hand while holding his shoulder with the other hand in case of another punch from Billy—a wise move as it turned out.

Less than five minutes into the next leg of their trip, Pete reached the point he could take his brother’s juvenility and his father’s sermonizing no longer. His earphones did little to mute the lieutenant’s droning litany of upcoming entries on the travel timetable, and every time Pete tried to make a design notation on his notepad, he found himself transcribing his father’s words. The lieutenant had just gotten to the part where at 0800 hours they would check out of their motel room and go to the onsite coffee shop for eggs, bacon, and two slices of toast, when the car hopped and veered sharply.

“That wasn’t me. It was the road!” The lieutenant said, pulling over to the shoulder to turn on the radio.

“But Dad, you’re gonna make us later,” Billy remarked from his half of the backseat where he’d already amassed a small mountain of debris and refuse.

“Not now, Billy,” his father scolded, spinning the radio knob in search of a voice. “Why can’t I get a damn signal? We’re not that far from the city … Ah, yahtzee!”

“… still searching for an explanation. Experts are stymied as to the cause of this unusual phenomenon, but they assure the public there is no reason to panic. You can all go about your day as normal …”

The lieutenant put the car back in gear and pulled into traffic as if nothing unnatural or disturbing had happened.

Pete stared out the back window in the direction of the diner and the dubious girl he encountered there, positive something was amiss and she was part of it.

“Eight minutes behind schedule,” his father complained, swerving as he tried to program his watch while steering.

Cassie turned around to face her sons with a reassuring smile. “See, boys, there’s nothing to worry about.”

Pete’s view out the back window suggested otherwise. Storm clouds converged over the area, swirling menacingly and pummeling the car with hail as a fissure split the highway open, trailing them. Overhead, the hawk from home followed, its wings battered by the hail, the mangled onionskin letter in its beak.